Interest in China increased greatly among theatrical circles in the 1920’s: Yevgeny Vakhtangov staged Princess Turandot by Carlo Gozzi in Moscow in 1922; the premiere of Giacomo Puccini’s opera Turandot was held in Milan in 1926. Latvia was also affected by Chinese fever in the theatre at that time. Romans Suta (1896–1944), the brilliant Latvian artist, a classical modernist, created exotic and particularly bright stage designs and costumes for production of Princess Turandot by Carlo Gozzi. The play was staged at the Jelgava Latvian Theatre in 1926. The story of Turandot concerns a beautiful but cruel Chinese princess who set riddles for all her potential suitors and punished by death those who were unable to solve them. Prince Kalaf solved all three riddles, the Princess softened her heart and declared the Prince to be her sweetheart. 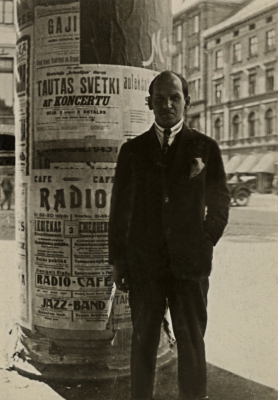 Romans Suta – from sailor to artist

Romans Suta (1896–1944) was one the brightest of Latvian modernists; he was a member of the Riga Group of Artists and belonged to the Zaļā Vārna – Green Crow – Society. He created the famous Baltars porcelain painting workshop and was an artist, critic and pedagogue. His life story is as exciting as his contribution to art. He was born to a family of shop owners who lived in Valka, but he and his brother ran away to Riga in 1910. They became sailors for a year. Romans turned to art in 1913 when he went with his sister to the Julijs Madernieks Studio where she was studying. He studied at the Riga City Art School; he was evacuated to Russia during the World War I and finished his studies at the Penz Art School. It was in Penz he met his future wife Alexandra Belcova.

Suta returned to Riga in 1917 and became totally involved in art. He visited Dresden, Berlin and Paris in 1923. After his return he became excited about the idea of creating modern interiors and furnishing articles. So, he created Baltars, the porcelain painting workshop. This is where he worked alongside Alexandra Belcova and Sigismunds Vidbergs. Romans was energetic and enthusiastic and became a pedagogue and critic. He also created stage designs and costumes. 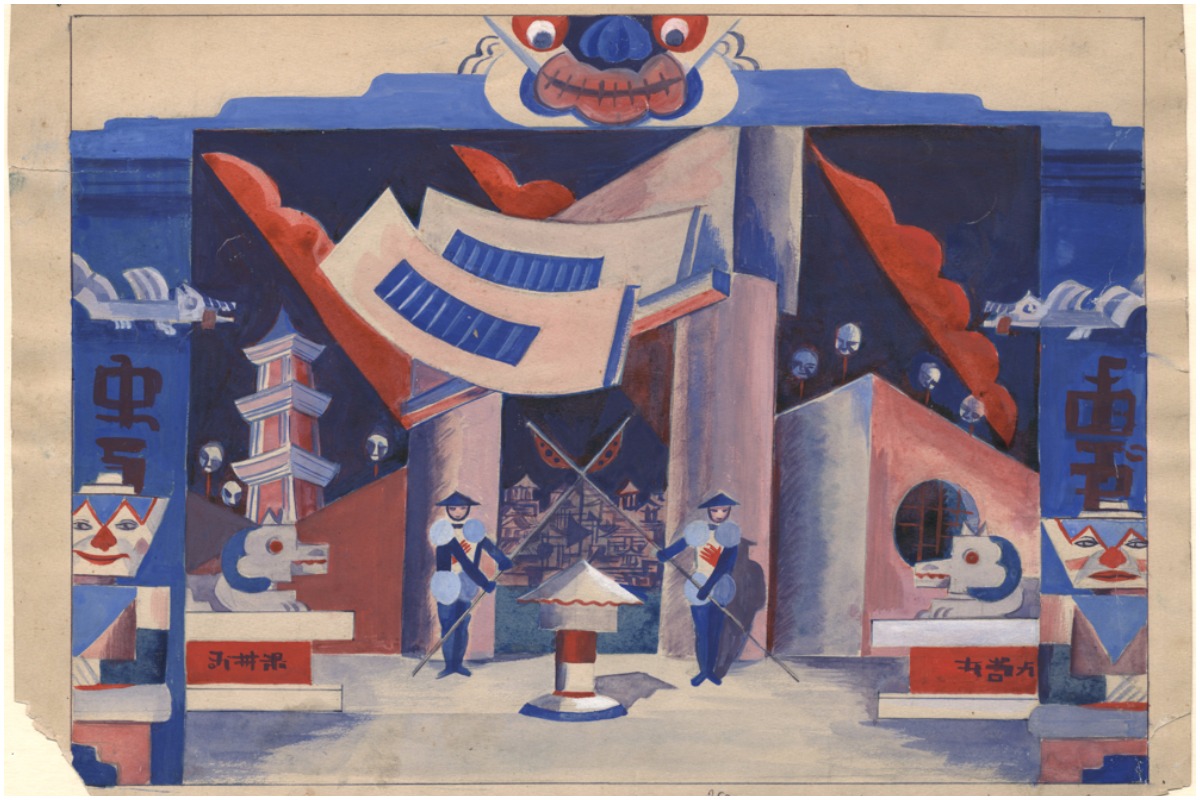 Sketch made by Romans Suta for stage design of «Princess Turandot», 1926.

Photo: Collection of Museum of Literature and Music

The performance of Princess Turandot commedia dell’arte by Carlo Gozzi directed by talented and experienced Jekabs Zakis, took place on the stage of the Jelgava Latvian Theatre and had its premiere at Christmas 1926. Inviting Romans Suta to create the stage design and costumes was a courageous move and demonstrated director’s serious artistic ambitions; Suta was known as someone who represented a new and controversial generation of artists. This was the time when art in Latvia was facing a conflict between generations – not everyone accepted young artists who criticised the copying of nature and impressionism and who themselves created art in a style of expressionism, fauvism and cubism. 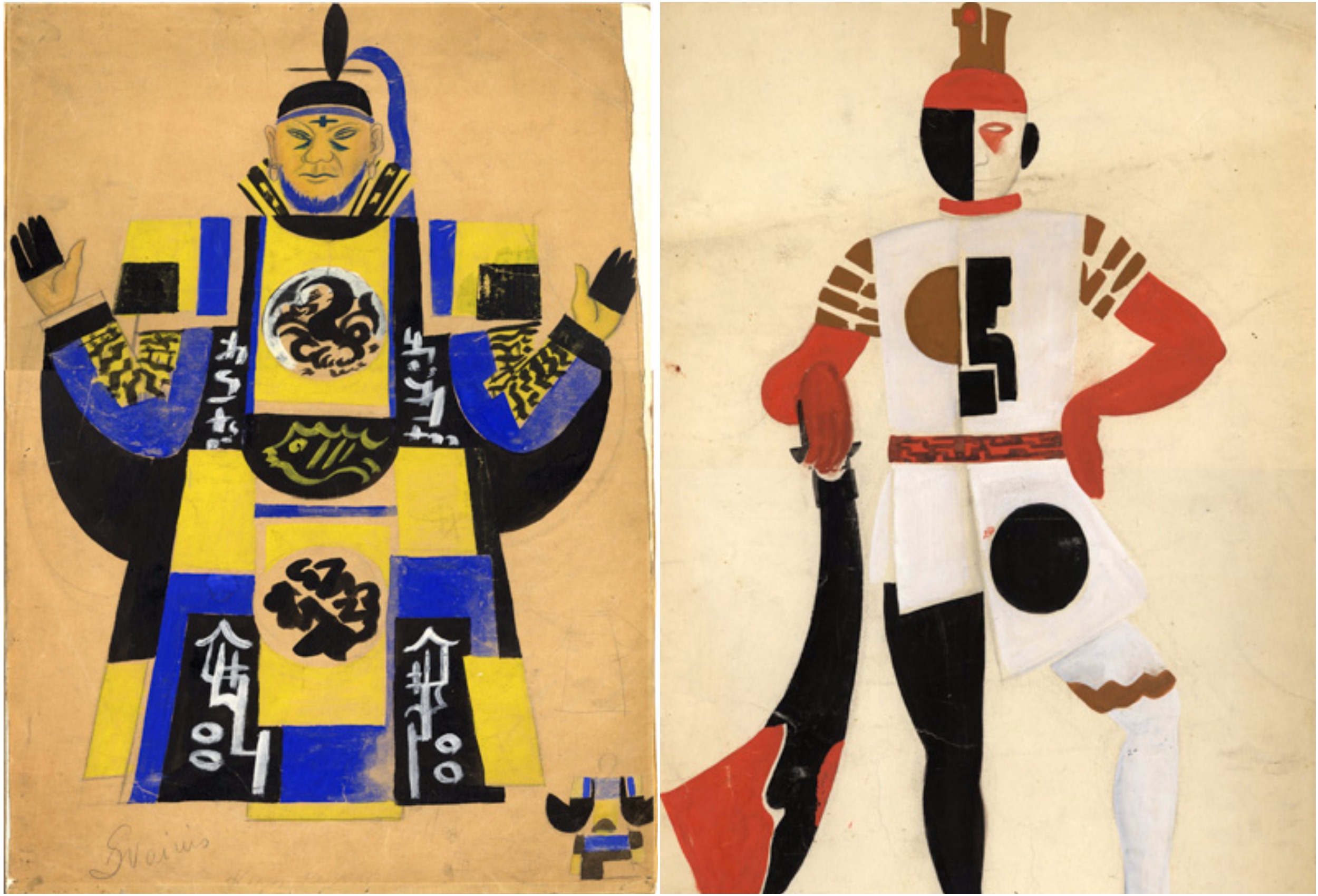 Costume designs made by Romans Suta for «Princess Turandot», 1926.

Jelgava Latvian Theatre was one of the most interesting theatres in Latvia, but it is true that the financial opportunities of the theatre could not be compared with options that theatres in Riga had. A reviewer in Aizkulises – Off-stage, a popular newspaper, commented on the financial constraints and wrote: “I felt the low financial budget from the very beginning of the performance. The theatre was not heated with coal or wood but by the warm breath of the audience. How very practical and economic!” Although the reviewer was not a connoisseur of the theatre and paid more attention to issues of secondary importance in his reviews, he praised the Jelgava Latvian Theatre at the beginning of his article and stated that the theatre had already managed to stage three new performances specially for Christmas 1926 and that the theatre had even engaged Romans Suta for the stage design of Turandot. Suta, the most left-wing and talented individual!

Photo: Collection of Museum of Literature and Music

All critics agreed that the highlight of the performance was the beautiful, colourful and ornate stage designs created by Romans Suta. However, it was difficult for critics to comprehend the radical set for the performance. Director Jekabs Zakis had been inspired by the legendary production of Princess Turandot by Yevgeny Vakhtangov in the Moscow Art Theatre 3rd Studio in 1922 and by the characters of the Italian commedia dell’arte. Vakhtangov used the principle of a ‘fairy-tale within a fairy-tale’. The performance in the Jelgava Latvian Theatre was also supplemented by ironic comments regarding events of the time. Critics did not see the resemblance between the Italian comedy style and the use of comments on topical events and therefore regarded them as ‘simplified jokes for a provincial audience’.

Princess Turandot by Carlo Gozzi was the last performance of Evgeniy Vakhtangov, the Master of Russian modern theatre. It was a performance which set the standard for modern productions. At a certain stage in his life Vakhtangov became tired of habitual realistic theatre and searched for a new language. Vakhtangov introduced the ‘fantastic realism principle’ where the realistic and psychological depiction of life was combined with the grotesque and deliberate conditionality of theatrical settings. Vakhtangov's Turandot was a tremendous success. Eyewitnesses noted that the most excited members of the audience even climbed on the backs of their seats in their excitement! In a few years production exceeded 500 performances. The performance was revived during the Khrushchev Thaw of 1963, when more adventurous productions were possible. 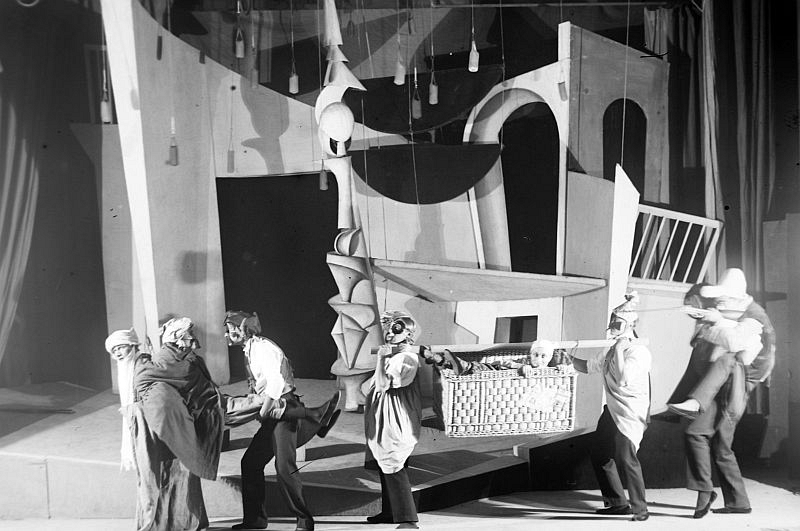 The ironic, innovative and visually theatrical Princess Turandot of Vakhtangov told a fairy tale in which the actors played a Venetian troupe of actors playing Princess Turandot, and the story was complemented by the responses of four classic character-masks of commedia dell’arte on the events of the time. This performance became the summit of Vakhtangov's creativity.

The creators of the performance in the Jelgava Latvian Theatre knew the performance in Moscow and were influenced by it. Romans Suta was also greatly interested in modern solutions to stage design and was always interested in creative and innovative artists and stage designers. As a result all these circumstances the play was staged in Jelgava – a combination of modernism, a Chinese theme and Italian commedia dell’arte. All of this clearly illustrated the artistic principles of Romans Suta. However, he did not seek more complex ideas. Instead of transforming the stage with a sophisticated constructions he saw the design simply as a background to the action. It can also be claimed that this was the best solution for a small theatre with financial constraints.

We wish to thank Natalia Jevsejeva, PhD in Art and Manager of the Museum of Romans Suta and Alexandra Belcova, for supplying both help and visual materials.