A Courtesan or a Woman of Fashion? 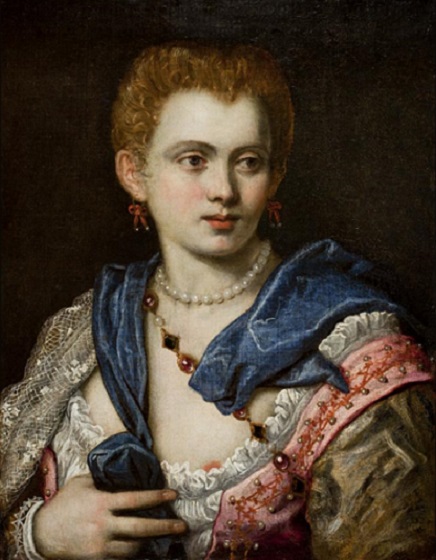 The famous Venetian courtesans... They were mentioned in historical records, and many literary works were devoted to them. In the 16–18th centuries, the city on the water was indeed the capital of these young and often very intelligent women whose jobs were to entertain wealthy clients by making conversation, singing, playing an instrument, and dancing, while providing them with a more intimate experience. Their contribution to the city’s economy was significant, but the city authorities who recognized the financial benefits of the activities of the charming women, tried to constrain them from wearing certain styles of clothing. The reason for this was to draw a clear line differentiating the courtesan women who were available for sale from those considered as decent ladies, who were rich and noble. According to some written accounts from that time period, the knowledge of the elegance and beauty of Venetian courtesans spread far beyond the city’s borders, resulting in the mishaps of visitors who often mistook respectable ladies for courtesans and approached them with indecent proposals, which was an unheard-of impudence!

Was it actually difficult to distinguish courtesans from the elite women of Venice? Perhaps, for a foreigner. The courtesans’ clothes were fashionable, bright and stylish. They were often quite wealthy and were able to afford dresses that were so luxurious they (sometimes) exceeded those of noble ladies. Courtesans were not afraid to combine pieces taken from the wardrobes of different social classes or accessories that indicated social status. It should be noted that in those days, the identification of one’s social status was often displayed by the clothes that a person was wearing (the marital status of a woman was easily identifiable because a maiden, a wife, and a widow would have dressed very differently from one another). The women of easy virtue were the first to introduce new fashion trends, they were always bold and self-confident, and they were good mannered. For a long time it was believed that the main distinctive signs of a courtesan included a very low neckline, specific platform shoes known as chopines, and an accompaniment of a pearl necklace. However, historians have found that this particular style of clothing was also typical of ladies from highly respected families in Venice: they, too, wore low-cut dresses and high, tower-like heels; as for the pearls, they were actually considered as a symbol of innocence at the time. This resulted in a rule that forbade the courtesans from wearing pearls. (True, the short pants that some courtesans wore under the dress to create a piquant image of woman-boy, could hardly be considered decent lady’s clothes of the period...) 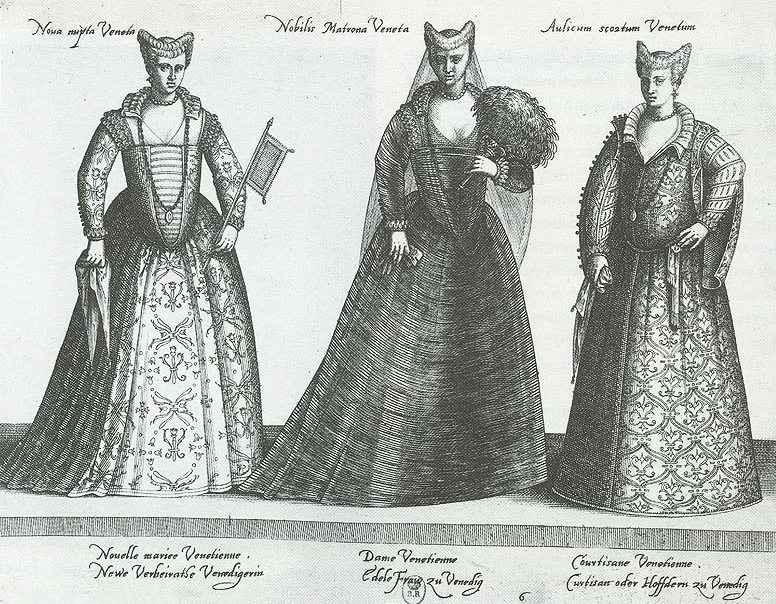 Reconstruction: “Hunting on the Lagoon” and “Two Venetian Ladies”

Evidence of this “noble woman or courtesan?” confusion is portrayed in the painting “Two Venetian Ladies” by Vittore Carpaccio (1490–1495). Strictly speaking, this is a painting which was painted on a wooden panel which was broken in half, with one half depicting two ladies who are sitting on a terrace and the other half (which remains preserved today too) represents a hunting scene. In the 19th century the portrait of the two beauties became widely known, especially after John Ruskin, an influential critic of the Victorian era, described it extravagantly as the best picture in the world. But Italian historian Pompeo Molmenti called it “Courtesans.” Due to his commentary, the myth of the “Courtesans” was born and then continued to replicate for years to come.

To this day, modern art historians are inclined to believe that the two ladies are not courtesans waiting for their wealthy clients, but are rather quite respectable representatives of the Torelli family, who are waiting for their loved ones to return from their hunt. There is too much evidence of innocence, chastity, and fidelity in this painting with symbols such as myrtles, lilies, doves, pearls, dogs, and even a white handkerchief, which indicate too much purity for us to assume that these women are courtesans.

So why did knowledgeable and respected critics make this error so persistently? The thing is, that the wooden parts of the diptych remained separate from each other for a long time, resulting in the loss of the portrait’s true meaning – of two ladies who were watching the hunt. This certainly resulted in a misunderstanding, since it is known that courtesans often looked out of their windows as well as sat on their balconies and terraces in order to demonstrate their sensual beauty to those who passed by. Some of the confusion was caused by the high platformed shoes, which were dropped on the balcony floor. Earlier it was thought that such footwear was worn only by courtesans, so maybe this was the detail which fiddled with the ladies’ good name... However, it is unlikely that we shall ever know the entire truth, since art historians are still debating the intricate lifestyles of Venetian women at that time.