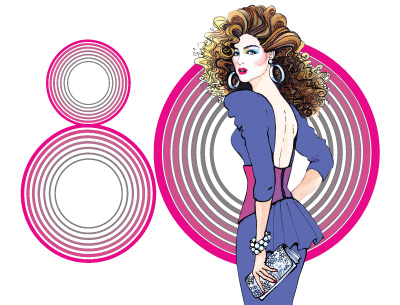 The exhibition has been created in collaboration with the Alexandre Vassiliev Foundation and is dedicated to the vivid and extravagant fashions of the 1980’s. The clothes of this colourful period were characterised by the remarkable silhouette of an inverse trapeze, accompanied by voluminous hairstyles. Daring makeup, oversized costume jewellery, bold colour combinations – all these characteristics help us to recognise the style of the 80’s.
The Brilliant 1980’s exhibition will show the work of the most famous designers of the 80’s, such as Yves Saint Laurent, Thierry Mugler, Emanuel Ungaro, Jean-Paul Gaultier, Comme des Garçons, Versace, Issey Miyake and Azzedine Alaïa. It will also show the examples of memorable and extravagant street fashion.

We are especially proud of the opportunity to show our visitors the new aquisitions of the Fashion Museum collection – the jackets of Catherine Deneuve, the elegant French film start. They were designed by Yves Saint Laurent, both her close friend and outstanding fashion designer. The Museum bought them at the auction of clothes of this great actress held at the beginning of this year and organised by Christie’s. Exhibition also highlights other new exhibits of the Fashion Museum – the coat and the dress of Margaret Thatcher designed by British designer Jean Muir. The Museum bought them at the auction of the belongings of Mrs. Thatcher held this year and organised by Christie’s. This marks the 40th anniversary of her becoming Britain’s first woman Prime Minister.

Part of the exhibition is dedicated to Latvian fashion in the 1980’s; this coincides with three special anniversaries that we celebrate this year. It is 30 years this year since the Berlin Wall was pulled down in 1989 symbolising the collapse of the Iron Curtain. We also celebrate the 70th anniversary of the founding of the legendary the Riga Fashion House this year. It is also the 70th anniversary of the “Rigas Modes” Fashion Magazine; a whole generation can still remember this magazine with gratitude. Along with the Estonian “Silhouette” magazine, “Rigas Modes” became a promoter of fashion styles and trends for many years in a vast union where there was limited access to fashion information.

The Brilliant 1980’s exhibition shows the work of French, Italian, American and Japanese designers, as well as examples of memorable and extravagant street fashion. Part of the exhibition is dedicated to the fashions of the 1980’s in Latvia. Although Eastern Europe was isolated from the rest of the world for political reasons, it was still affected by changes in fashion because fashion has the ability to cross borders and be seen everywhere. This year we celebrate the 70th anniversary of the founding of the legendary Riga Fashion House; there is a whole generation which can still remember with gratitude the “Riga Modes” and the Estonian “Silhouette” magazines. They became promoters of fashion styles and trends for many years in a vast union where there was limited access to fashion information.

It can be said in retrospect that the trends and styles produced in the 1980’s represented the last decade of colourful and distinctive fashions that were so distinctive, recognisable and popular all over the world. Later, fashion became much more eclectic and focused more on the search for individual styles. That is why the 80’s are such an interesting era to look back on; an era which seems so close but yet remains so distant.

Many western countries experienced economic boom; the middle class started to live a better lifestyle and consequently they also spent more and more; production and technology started to grow and develop. The 1980’s was also the boom time of the development of household electrical appliances: the first personal computers and mobile phones emerged. The startling idea of the World Wide Web appeared in 1989 which has been central to the development of the Information Age.

At the same time, a new image of a woman was beginning to form – the idea of a woman as a leader and as a winner. The recognisable and colourful visual image of a prominent and stylish woman was shown in Dallas and Dynasty, the American television cult series of the 80's. There were also influential women in real life and some of them also became style icons: Margaret Thatcher, for example, who became the first female British Prime Minister, Princess Diana, whose image became an inspiration to millions of women around the world. Nancy Reagan and Raisa Gorbachova also became well-known as the wives of world leaders, while actresses gained fame as well as the supermodels who earned millions.

Women were slowly conquering the business world too. The power dressing style was taking over from other styles in the office. This style was based on the designs of suits worn by men. In contrast to the formal office dress, evening dresses developed into a disco style: long, fitted dresses made of shiny, metallic, often elastic fabrics, richly decorated with beads, sparklers and artificial jewels. Brilliant is the word that characterised the fashions of the 1980’s. During the day a woman concentrated on being a business woman but in the evening she turned into an attractive and dangerous predator in a sexy dress.

The range of colours typical of the fashion of the 1980’s was bright and contrasting – neon tones, rich gemstones. Geometric patterns – stripes, checks and polka dots were popular; bright prints and combinations of black and white, as well as pink, red, purple tones were also widely used. Often a contract of two colours was used in clothes; for example, black and red, green and blue or yellow and white.

A woman of the 1980’s not only fought for her career and business but also demonstrated her sexuality aggressively, such as the singer Madonna. The Italian fashion designer Giovanni Versace made sexuality a recognisable sign of his fashion house. Other designers focused on aesthetic fetish elements in fashion: a corset reappeared in different variations in a series of the most colourful fashion designers of the 1980’s. Leather clothes and the excessive use of accessories were popular as was accentuating legs in high-heeled shoes and body-con outfits.

The attitude towards fashion and designer clothing was also changing – the economic boom of western countries added to the demonstration of status. Labels of fashion houses were visible on clothing and accessories and became an important feature of the fashion industry. Marketing executives focused on Yuppies – the young urban professionals – who earned a lot and were eager to spend it on luxury goods and entertainment, including fashion.

The cultures of fitness and sport had a tremendous impact on the 80’s. Actress Jane Fonda created a global obsession with aerobics exercises that spread around the world at the speed of a forest fire. A morning jog became a must-do activity accompanied by the Sony Walkman portable cassette player, as well as a terry headband around the forehead and wristbands. The 1980’s was also the time when the sports shoes boom began – trainers became an integral part of the wardrobe. One of the most famous was the Nike Air Jordan, created in 1985 in collaboration with Michael Jordan, the legendary basketball player.

The 80’s have also stayed in our memories because of remarkable music; musicians were becoming more and more iconic for young people. It was largely driven by the legendary music channel MTV, which started broadcasting in 1981 and showed the latest music videos. In large cities, such as London, the interaction between music and fashion manifested itself in vivid subcultures such as punk, young romantics and later gothic, early rave and hip-hop.

The second half of the decade saw the increasing influence of Japanese designers in fashion. Avant-garde Japanese designers who produced dark, ascetic, asexual and multi-layered fashion became a source of inspiration for many other young designers, setting the ground for the minimalism and the deconstructionism of the 1990’s. This style of clothing did not accentuate the gender of the wearer; additional decorations and details were removed and outfits even revealed how they were made with a look of incompleteness or with the seams visible on the outside etc. All these trends inspired by Japanese designers are still popular and highly visible in the fashion of today and remain topical.

The processes of political change started in 1989; these processes, which had been fermenting for some years, finally began to cause tangible change. It is exactly 30 years this year since the Berlin Wall was pulled down, symbolising the collapse of the Iron Curtain and the disintegration of the empire of socialism. This wind of change led to a short-lived interest of fashion designers in Soviet things but it did not create radical changes in fashion trends. The overwhelmingly glamourous fashions of the 80’s simply splintered into many different styles in the 90’s.